Saundra Clow is the owner/operator of Alpine Dogs, which she started in 2008, combining her lifelong dream of working with animals with her love of the outdoors. In 2009 Saundra received her certification as a professional dog trainer and is a strong advocate of using positive, evidence-based training methods.

Saundra is also a graduate of the Academy for Dog Trainers, a rigorous 2-year dog trainers program run by Jean Donaldson.

Saundra offers the option of working together online, no matter where you live.

In her spare time, you’ll often find her out with her own two dogs, Penny, a cocker spaniel mix and Cache, an Australian Shepherd. Cache & Saundra compete in CARO Rally Obedience and Cache has received his Novice Title, Novice Team Title & Advanced Title. As a team, they have had great success in the ring with several first-in-class finishes. Cache also has his Novice, Intermediate and Advanced Trick Dog Titles. 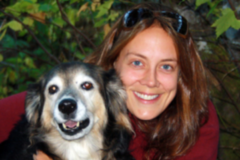